Powerlifting is the sport of strength. Men and women of all ages and sizes compete.  It consists of three attempts at maximal weight on three lifts: squat, bench press and deadlift. Similar to Olympic Weightlifting, it involves a single lift at maximal effort of a barbell loaded with weighted plates. Each athlete assigns themselves to a federation, age category and weight class in order to compete. 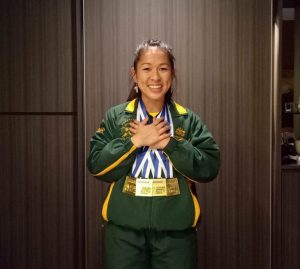 My name is Wendy Chan and I am an Elite 1 Powerlifter.  I am a member of Powerlifting Australia that is in affiliation with World Powerlifting.

I began my journey in October 2014 under affiliation with IPF (International Powerlifting Federation). I competed in my first competition at Iron Underground in Albion. As this was my first competition, I was classed in the junior age category (18-23 years) weighing in the U52kg class. I gave it my best shot with only 2 hours to ensure I would be 52.0kg or less. I attained a 115kg Squat, 55kg Bench press and 122.5kg Deadlift; totalling 292.5kg at 50.35kg BW (Body Weight). This gave me an unofficial national record in this class, however as I had only been a member of Powerlifting Australia for 3 months, I was unable to receive this record. I did walk away with a Gold medal in my weight category and overall ‘Best Female Lifter’ on the day (this is a calculation of strength level against relative body weight).

Due to this unfortunate formality; my hunger to attain a record sparked.

The year later, March 2015 I competed in my second ever competition. Once again, I had signed up at Iron Underground in Albion to help build my confidence in an environment that was familiar. This time round I managed 107kg Squat, 57kg Bench Press and 127.5kg Deadlift, Totalling 292.5kg. Now, when you look at the numbers, I 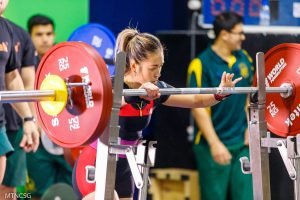 didn’t make much growth between the two competitions. However, when you consider the body weight difference; progress was evident. In 2015, I decided to drop down to the lighter weight class of being U47kg or less. So, for this competition I weighed in at 45.35kg. I scooped up my first of many Junior National Records in the U47kg weight division and a secured spot to compete at a National level.

Then I was invited to compete at an International level come 2016.  This was my redemption year travelling to Killeen, Texas in June. I was crowned U47kg Junior World 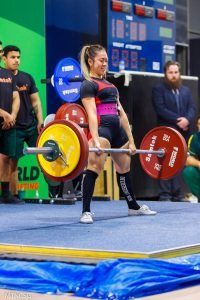 Champion! Receiving Gold in Squat 120kg, Bench 67.5kg and Total 315kg, Silver in Deadlift 127.5kg. I broke a number of National, Oceanic and Commonwealth records. I also competed in my first ever Open National Championship in October securing: 125kg Squat, 70kg Bench and 132.5kg Deadlift. Totalling 327.5kg at 46.5kg BW. I became not only Open National Champion as a junior but Junior World Champion.

2017     I began my year competing in the U52kg weight division before knuckling down into 2 major competitions towards the end of the year. Open National Championships in Melbourne gave me gold once again with a 125.5kg Squat, 72.5kg Bench and 145kg Deadlift. Totalling 338.5kg. My final competition in 2017 would be my last as a junior (under 23 years of age). Travelling to Singapore for the first time and wanting to secure some World Records under my belt. I weighed in at 46.6kg the morning of. My nerves were through the roof, nothing familiar but the weights and my coach. I was placed in the second group for the morning with the lightest male class. I was even more nervous and concerned with the unknown. As I stepped out onto the platform, I knew it was my last chance to give it my all. This was and is my proudest moment to date. I walked away winning Gold in my weight division once again. I also received numerous Oceanic, Commonwealth and Australian National Records. But my day wasn’t done there. Walking onto the podium I was awarded with breaking the World Records in the IPF for: Squat 132.5kg, Deadlift 150kg and Total 355.5kg.

2018     a change in affiliation to WP (World Powerlifting). I had a small break; only competing twice. Nationals in Melbourne was a stressful time. I went out to dinner with family the night before and woke up 1.3kg overweight!! I had to try every trick in the book. Tears flowed and I was on the verge of giving up. With 15 minutes to spare I pulled myself together and decided to give it a go. Stepping on the scales I made it. Totalling 358.5kg. Following this competition, I decided to no longer chase numbers but work on securing a higher Wilks (total to body weight score). 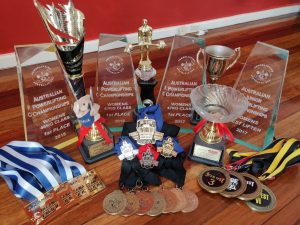 2019     I am working towards maintaining my new weight category and building strength. This year’s goal was working towards being the 3rd ever female to secure 500 Wilks points. June lead me down for yet another trip to Melbourne to hold onto the Open National Championship for the 4th time running. A total of 370kg and 494.57 Wilks. With only 5.43 Wilks points to go it was in my near future. I had all fingers crossed for this to be my end of year celebration…so as of Saturday 7th December 2019 this was achieved. At a local competition, once again held at Iron Underground in Albion; I walked away with a 134kg Squat, 78kg Bench Press and 167kg Deadlift. Totalling 379kg @ 47.4kg BW and 506 Wilks!!! I achieved 8/9 lifts. Missing my 2nd attempt squat at 134kg and having to reattempt. The moment I wasn’t able to stand up with this weight on my back I lost all hope to achieve my goal. I ran back to the warm up room and out the back door in tears, kicking myself for setting up such a high expectation. Little did I know once I had my cry and reminding myself to calm down and that it wasn’t the end of the world, everything came together. The stars aligned and the cards were in my favour once again. I won gold in u48kg class and overall best female lifter. 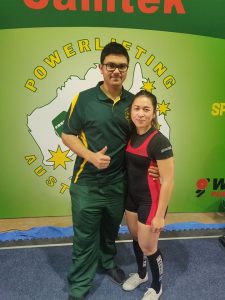 All of this wouldn’t have been possible without the amazing support and programming that Arief Hunter does for me. Whether I believe it or not “trust in the process” he always says. It seems he knows me better than I know myself. Always growing and learning by living in the moment.