Growing up in a household where sport was the basic undertone of day to day life, I always knew that in one way or another it was going to guide and shape who I am. I never could have imagined though how influential the synergy between powerlifting and other aspects of my life would be. 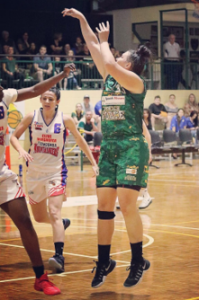 I’ve played basketball since the age of five and always had promise surrounding my ability. Being a solidly framed girl, I was constantly swinging between owning my power and not feeling worthy because I didn’t at the time for the stereotypical basketball body type. I played strong and hard and while I did achieve some great things in basketball that I am proud of, I can honestly say I never really felt like I thrived.

In 2017, I was playing in the Queensland Basketball League (QBL) for the Ipswich Force.  I decided to link up with a PT named Scott at my local gym to help me gear up for a big season, build some strength and overall help me manage some significant back injuries from the past. It was Scott who introduced me to Powerlifting!! One training session he said, ‘Hey you’re pretty strong, have you thought about competing?’. After some excessive Instagram stalking, I was sold!! Watching people move incredible amounts of weight I had one thought – I WANT TO DO THAT!

My first training block was intense but also a blast. I was playing QBL as well as training for a comp, which meant I was training every day, sometimes twice a day, but trying to achieve very different outcomes physically. There were plenty of QBL training’s where my team mates would sling so much banter my way because my poor legs just wouldn’t work! I soon realised that while I loved being on court with my teammates, in the gym I was thriving! At my first comp, at SSG last year, I had never been more amped about competing. My eyes were completely opened, and it blew my mind that such a competitive and intense environment could also been so warm, welcoming and supportive!! 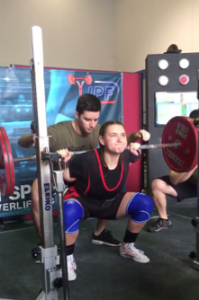 The feeling of the energy in the room and being surround by so many strong, strong people was such an empowering moment. I realised that this was where I was meant to be. This is where I was going to THRIVE!!

At the start of 2018 I set myself some pretty ambitious goals – one of which was a 400kg total at sub 84kg body weight. While I am yet to achieve this, I definitely have made some huge gains in the last year and half. With the help of a number of generous lifters and coaches my squat has increased from 100kg to 140kg – Bench Press from 60kg to 75kg – Deadlift from 125kg to 170kg – Total from 285kg to 385kg.

Overarching all of this though is the growth within myself that has reached well beyond the realm of powerlifting; to my career, my relationship with myself and others, as well as my perceptions of the world.

Powerlifting provided me the avenue to realise that my worth and power in this world cannot be defined by anyone else but myself.

Unlike most sports, powerlifting is pure! There is no room for someone to say that they think you are or aren’t good enough or strong enough. It doesn’t matter what anyone else thinks. It only matters what YOU think and what YOU do. When it comes down to it, I am the only one who can do the work to grow physically and mentally. While I have been so lucky to have the guidance and support of so many incredible people, it comes down to me. 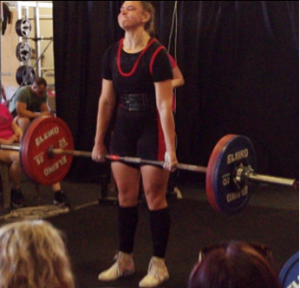 On the other hand, there are so many elements that are out of my control. Some days in the gym are just heavy and/or flat!! In a sport that sees you compete maybe three times in a year, being able to not only show up day in day out but also trust the process is a huge mental game. Accepting what is out of my control, trusting the process and making the most of what I have in the present moment has been a huge realisation for me. I am only just starting my lifting journey and I really cannot wait to continue to grow, strive and thrive!!!