This year I’ve decided to lift with Australian Powerlifting Union (APU), a decision I made after Powerlifting Australia nationals last year. I’ve loved my time at Powerlifting Australia, where I’ve made a ton of friends, and have 3 national, 1 Oceania and 1 World title from the last 3 years of lifting under this banner, but as they say ‘the definition of insanity is doing the same thing and expecting a different result’, so I’m keen to reach for the challenging levels of competition I see in the IPF, the international branch of APU.

I have many powerlifting friends, including my coach and teammates, who are taking this same path, so it feels right for me.

Of course, my love of bright and shiny things (medals perhaps?) draws my immediate attention to the APU state and national championships, both in the first half of 2021. Being a newbie to the federation I need to qualify to participate in both, but due to the time constraints (or maybe just because the APU people understand that I like cookies?) I have the luxury of not needing to qualify in my usual weight class, so I registered for the North Queensland State Qualifier as an under 63kg. 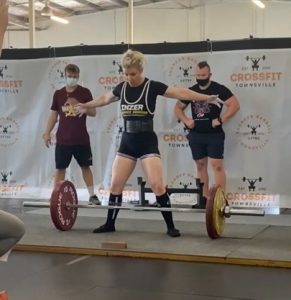 The competition was on Saturday 13 February in a (gasp) Crossfit gym up at Townsville. I travelled up with Sarah Wheal, a powerlifting friend who is an ex-crossfitter (just in case I inhaled the crossfit fumes – so tempting, I reckon I’d be good at muscle ups!) and we committed to an under 24 hour turnaround for this adventure!

Early Saturday morning we awoke to a steamy 45 degree day with 98% humidity at 5am (haha, not really but it felt like it) and made our way to Crossfit Townsville.

New fed, same comp day feels – some new faces and some familiar ones – I soon settled into the warm up routine after weigh in (a light u63 at 59.45kg, even with a couple of cookies on board!), tunes on, food in, brain on.

Being my first competition without any of my McDonald Strength team mates around, I was feeling a little nervous but I had wonderful support from the Panthers Powerlifting and APU Queensland teams, with Colin Webb platform coaching and Lachlan Green helping with warm ups. I came away with my first gold at APU in the u63kg M1 division, and finished 2nd overall on the day on 80.19 IPF points –Brigot Pugh took out first place – we’re both masters – the old girls can lift!!

My Results From My First APU Powerlifting Competition

Even though this was just a qualifier and I hadn’t done a peak, I had a crack at a bench PB of 82.5kg – not to be this time, I had to settle for a speedy 77.5kg but I did successfully switch from conventional to sumo deadlift and pulled a 155kg, only 1kg under my competition best. I finished with a 352.5kg total, 4.5kg under my total at nationals last year.

In the past I’d have been pretty annoyed with myself at the lack of PBs on the day. This time, I knew that, as a qualifier, the focus would not be on numerical PBs, so I had to come up with some new metrics… I did this retrospectively, because I think it’s important to come away with a win of your own definition, despite the numbers, so here are my PBs from the day:

The Powerlifting Community Is Just Like A Supportive Family

Even though I was thousands of kilometres from home, I found that I still had friends and family there on the day – that’s how powerlifting is, the community is always there to support you. It was great to travel with Sarah – we met at Oceanias in 2018, first international competition for both of us – we’ve both been powerlifting a similar amount of time so we have lots of similarities in our journeys (aside from her squat, where she is a few light years ahead of me!).  Seeing old (haha, masters? Or long term?) friends up at Townsville was lovely too – Meaghan Trovato came along to watch the event and took videos for myself and Sarah as she knew we were both attending alone – what a champion, because… no vid, no did! And my sister-in-law dropped in for a bit to see what I do first hand, which was nice because powerlifting can be hard to explain to family unless they’ve seen it.

After the traditional post-comp burger, we made our way home, adhering to the 24hour away-competition deadline, and touched down back in Brisbane in time for a Valentines Day sleep in… next cab off the rank is APU Queensland State Championships in Nambour at the end of this month – I’m back in the under 57kg category so those cookies will have to wait a bit, but I’m definitely having another go at that 82.5kg bench!! 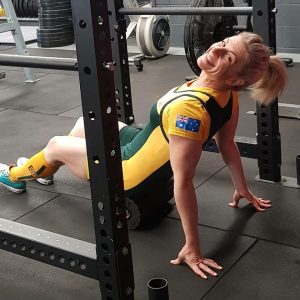 I used to be your typical ‘gym-bunny’ – for most of my 30’s, daily workouts consisted of bodybuilding splits (light weight; high reps only) mixed with pump classes and spin classes. Cardio, cardio and more cardio, sometimes 2 classes a day, before and after work, along with every variation of diet or eating plan I could find, all to achieve the perfect sports model look.

Like 99% of humans on the planet, that combination didn’t actually work.  I didn’t look like a sports model and I was continually trying every type of new workout or exercise and/or diet I could find, looking for the magic combination.

I don’t know whether turning 40 was some kind of tipping point – I have often heard that doing the same thing and expecting a different result is the definition of insanity, so I was probably keen to stop being nuts! I also had some nagging from a good friend to try powerlifting, so early in 2018 I turned up at yet another new gym and met Graham McDonald. The brave man agreed to give me shot at being a powerlifter, I’m still not sure why! I didn’t really fit into the powerlifting community – I don’t like heavy metal or donuts, and I have no tattoos, so I’m kind of a sparkly outlier – but the whole team embraced me anyway and my powerlifting adventures started from there. 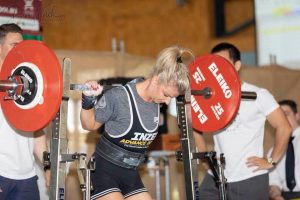 My first comp was in May 2018 up at Airlie Beach (North Queensland, Australia) – I was super nervous and so grateful to have the McDonald Strength team, along with my husband Rob there to cheer me on – I actually got a medal in my first competition, coming 3rd in the 63kg class.

From there I started to see significant changes in my body (remember, more muscle = more energy burnt!), and with some sensible nutrition I was able to go down into the 57kg class for Master’s Nationals 2018 where I won gold in my section.  I have great memories of that day, and that whole trip, where I got to share a flat and some great late night chats with my team mate Libby. 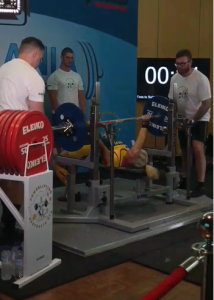 The Oceania Championships in December 2018 was my absolute amazing, proudest and most devastating day in powerlifting to date, all in one. The amazing part was that I not only got to wear the green and gold and again won my section, but also came 1st overall in Master’s Women with a total of 330kg (Wilks 384.52).  I also had half the crowd cheering me on as a lot of family and friends came to see me lift – one of my best friends even made me a sparkly sign! But I was devastated when I missed my last deadlift – 150kg came off the floor easy but I couldn’t lock it out. This was my first failed deadlift in a competition and I felt like I’d let everyone down very badly. I know that sounds silly when I won literally everything I was eligible to win on the day, but it’s a personal goal that I was really looking forward to nailing… more to come on that. 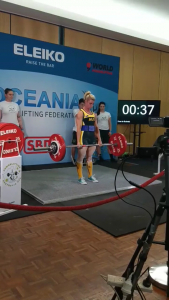 Oceanias was where I got to get more involved in the behind-the-scenes part of the sport too, by learning how to be involved on the technical desk, which also gave me a front row seat to the heavyweights session! I am also lined up to be a spotter & loader at an all-women competition later in the year.  That’s another thing about powerlifting – everyone helps out, which adds to the community spirit of the sport.

Training is now my happy place, rather than just where I got to try and burn calories – the focus that each session requires means that the day’s problems are soon forgotten once warm ups are done. And no matter what my day has been like, I know that I’ll get to go and do something amazing when I get to training – what sort of person puts double their own body weight on their back and crouches down then stands up with it?! It really helps me put things in perspective – i.e. if I can do that, then the bad meeting I had with my boss, the slow traffic or the HR issue I have to deal with probably isn’t going to break me. 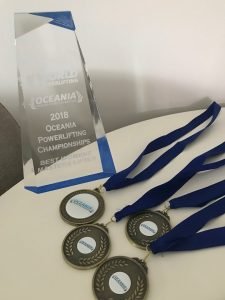 Life feels very different now that I’m a powerlifter (and yes, I identify myself like that often enough to bug people!) – I no longer pine after the sports model look, I eat carbs, I wear short shorts. Life is good. I feel like I have found my thing, and my people.

Of course I’m inspired by the superstars of powerlifting like Liz Craven and Marisa Inda – and more recently Jess Sewastenko – watching them always reminds me that any lift I attempt is actually possible. But I also love the diversity and opportunity for people of all shapes, sizes and ages to achieve.  I like to think that one day I’ll be an M5 lifter, still wearing sparkly stuff and listening to techo!

For now my next goal is to defend my title at Master’s Nationals 2019 in Cairns. I also have that missed 150kg deadlift to reclaim from Oceanias – it had better be getting it’s affairs in order. 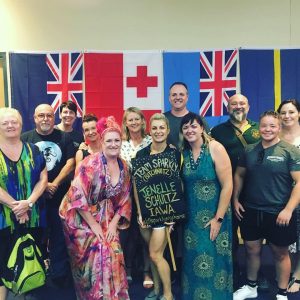